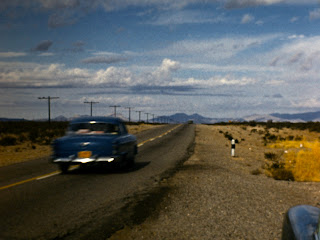 No More Road Trips? isn't a conventional documentary. It's made completely from home movies that were shot by hundreds of people, starting in the mid-1920s. Its narrative traces a composite automobile journey from the Atlantic to the Pacific, beginning with the shoreline and historical monuments of New England and ending on a beach in southern California.

Other than a faint ambient soundtrack, the film is silent. I've written no narration, nor have I commissioned music. The primary soundtrack for this fully participatory film will be made fresh daily by audiences at each screening. Perhaps they'll identify some of the places that come and go in the 600-plus shots that currently populate the cut. Perhaps they'll ask me questions, or answer those posed by others. Or perhaps they'll react tendentiously, in the manner of Question Time in the British House of Commons, or riff rowdily in the style of the Elizabethan theater. Once the movie starts, it belongs to the audience. I don't want to limit how people will respond to the film. But I hope they will act on their permission to speak and create a commentary, not just on the scenes that pass by as our trip speeds west, but on what automobility, speed and travel mean to them. And I hope they'll be moved to think about whether we've reached the end of the open road.

A few years ago a 22-year-old friend said to me, "We can't drive across country like you used to do all the time. Gas is too expensive, and not too many of my friends own cars. Flying is easier, but driving is hard." I couldn't stop thinking about this, especially as I saw fuel prices increase and incomes shrink. I read that U.S. auto manufacturers were starting to worry that younger people were buying fewer cars. And I was astonished when I found out that people were postponing getting drivers' licenses, if they were even getting them at all. When I was growing up, people got licenses on their 16th birthday. And I started to wonder whether people still imagined that they could change their lives by taking to the road -- whether there was something better at the end of the rainbow. And these days, I'm not so sure that the end of the road is any different from the beginning.

Are we approaching "peak travel?" Is localism, which is a pretty good thing in many ways, edging out the nomadic tradition in America? Will we be staying put more than we have in the past? And if so, how will we react to diminished horizons? Is it possible that the journey TO America, which so many new Americans have made in recent years, might become a more significant part of our shared consciousness than the journey WITHIN America? I don't know the answers to these questions, but I hope this movie will get people talking about them. While it's playing.

I've been making films like this for seven years -- ten feature-length local history compilations that have played in San Francisco and Detroit. Each is all-archival and has a little bit of sound film, but most of the time they're silent. After the first show (which had an ambient music track), I got the idea of asking the audience to make their own soundtrack, and I realized I liked this kind of filmmaking.

As an archivist, I felt most filmmakers weren't letting archival images fulfill their potential. Most people saw archival images through historical documentaries on TV or home video, and what were they seeing? The images were manipulated into over-narrativized "stories" whose trajectory was controlled by the script and modulated by music, and much of the time were reduced to little more than "eye candy." The emphasis on documentary "storytelling" took power from images and gave it back to words. I've written about this in greater detail here.

This, coupled with the excitement that I (and others) feel when I watch original archival materials not inflected by narration or music, has drawn me to make what I'm calling "evidentiary cinema." Evidentiary cinema privileges original documents, putting them before an audience whose appreciation of the evidence completes the film. I produce a portion of the film; the audience makes the rest. Right now, this happens through questions, answers and conversations in the dark. Indeed, it could happen by many means -- tweeting, remixing, call and response.

Home movies are perfect raw material for evidentiary cinema. Since 1923, almost every activity, ritual, ceremony, place and interaction have been recorded by home movie cameras. The existing body of home movies equals a near-complete moving image portrait of the last 90 years. The evidence exists, if we can find it. And it addresses the perceived need for storytelling all by itself. Every home movie is its own narrative, however unstructured and errant. There's a shooter looking at a subject, and a subject responding. Storytelling without stories.

I talk about "The New Evidentiary Cinema" here.

Home movies about road trips are especially wonderful, and my fascination with these (especially with the view of the landscape seen through the car window) led me to make No More Road Trips?. These private views of the public landscape show much more than roads and roadsides. History is embedded in the travel films I'm using -- traces of the Great Depression, World War II and Vietnam, changes in land use, the fate of the Rust Belt city and town, the transition from two-lane roads to freeways, and much more -- all show up in my film.

Assisted by a generous grant from the Creative Capital Foundation and the in-kind support of Internet Archive, which owns a smallgauge film scanner, I began scanning 16mm and 8mm home movies in 2011. So far we've scanned about 5,000 out of my collection of 10,000, and it's from the first 5,000 files (which total over 400 terabytes) that I've drawn the material for my film.

If you would like to inquire about availability of No More Road Trips?, please email me at [footage] (at) {panix.com}.